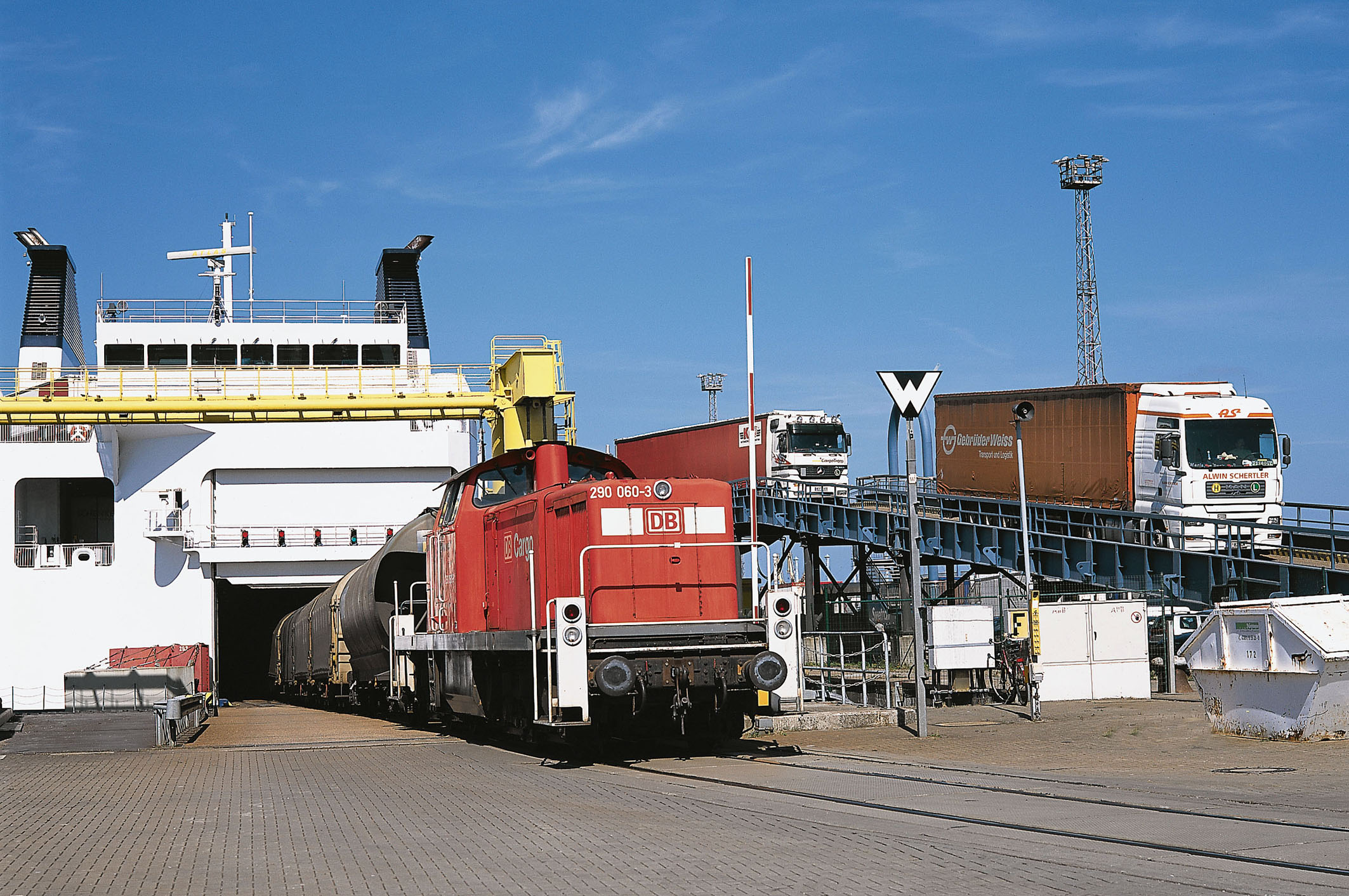 Rostock Overseas Port is a major railway port on the German Baltic Sea coast. Around one fifth of all goods handled at the port arrive or depart by train. In the year 2020 the cargo carried to and from the port by rail amounted to approx. five million tonnes.

More than 60 years ago Rostock Oberseas Port was designed and built as a railway port.  Outside the port is a shunting yard with about 180 kilometres of railway track. The port area has railway tracks of about 54 kilometres length. Also, by now Rostock is the only port in continental Europe with a railway ferry connection to and from Trelleborg in Sweden. This is operated by the shipping company Stena Line with the two biggest railway ferries in the world.

The line lockings for intermodal trains in the Danish railway network currently pose a great challenge for railway operators and forwarders, but also for shipping and port companies. At the port of Rostock many additional intermodal trains are being processed at the moment while others use the existing possibility to ferry trains provided by Stena Line. „The port location of Rostock is proud to be part of the solution and to be able to prove its efficiency together with its partners the shipping companies, railway operators and cargo handling businesses also in times of the coronavirus pandemic and line lockings in the Danish railway network. The capabilities of the port location in terms of railway services will be ensured now and also in the future by adequate investments in railway tracks and intermodal handling facilities by ROSTOCK PORT and its partners“, says Jens A. Scharner, Managing Director of ROSTOCK PORT GmbH.

Scandinavia can be reached by rail both via the fixed crossings and by sea between Rostock and Trelleborg. The present situation once again clearly shows the need for redundancy solutions also for the railways. The Swedish infrastructure operator Trafikverket has recently demonstrated the necessity of a railborne transport alternative to and from Sweden in a technical report. The ferry operator Stena Line and the two railway ferry ports of Trelleborg and Rostock need economic support to maintain the cost-intensive railway infrastructure.

Handling of intermodal load units in Intermodal Transport at Rostock Overseas port increased impressively to 94,800 units (+7 percent) in the year 2020 in spite of the coronavirus crisis.

“We are glad that two new intermodal services have started their operation from Rostock at the turn of 2020/2021, to Bettembourg and Bratislava. This highlights in particular the efficiency of the railways as a transport system and of intermodal transport also in times of crisis. We see a great potential for growth in Intermodal Transport in the coming years. The port location of Rostock can make its contribution to environmentally friendly logistics solutions by providing the railway infrastructure“, says Dr. Gernot Tesch, Managing Director of ROSTOCK PORT GmbH. By creating the connection to and from Bettembourg, in addition to destinations in the Benelux countries it is possible to reach destinations in France and Spain on the one hand as well as destinations in Great Britain and Ireland via the North Sea ports, on the other. The new connection to Bratislava clearly demonstrates the potential of intermodal transport on the axis to south-eastern Europe that is becoming ever more important for Rostock.

The port operator ROSTOCK PORT consistently works with various partners to expand the existing intermodal services and/or create new ones. In this, mixed train concepts in wagon load and container transport play an ever greater role. The positive trend in the handling of intermodal load units in Rostock has led to development plans which are to enable the intermodal handling of trains 740 metres in length in the future.

Container transport between China and Europe along the Iron Silk Road has also shown a steep growth for some time now. This growth calls for alternative routes to the traditional ones via Belarus and Poland. By carrying the boxes on container vessels between Kaliningrad and Rostock it is possible to create additional capacities and to above all significantly speed up transportation times. For customers in Sweden, Norway or Denmark transportation via Rostock also offers another advantage: it enables them to take the direct, fast and ecologically sensible route by ferry to and from northern Europe.

Apart from speedy adjustments of capabilities at the Intermodal Transport Terminal both ROSTOCK PORT and DB Netz continue to invest in railway transport as an environmentally friendly means of transport. DB Netz is for instance about to reconstruct the shunting yard outside the port to create the preconditions for using its railway infrastructure in line with the demand. These measures by DB Netz are continuously coordinated with the measures undertaken by the port operator ROSTOCK PORT. Together, both partners are involved in creating an efficient rail connection for a new roll-on roll-off  terminal at the port of Rostock which is to receive and feed hinterland transports almost entirely by rail.