28.68 million tonnes were handled at the Overseas Port of Rostock which scored an increase of 14 percent or 3.58 million tonnes compared to 2020, notching up another record.

This result is remarkable on the one hand because all four handling divisions contributed to it, and on the other because it shows a considerable increase above the level of activity in 2019, the year before the crisis, by a respectable 11.7 percent.

The strongest growth was achieved in the handling of wheeled cargo in ferry and ro-ro traffic. The steady development of the ferry and railway network over the last few years, for instance by strengthening the existing ferry services and establishing a new ferry destination as well as several new railway destinations, is clearly paying off.

Gratifying growth rates were also achieved in intermodal transport and in container traffic which runs by rail between China and Europe and by ship between Kaliningrad and Rostock.

The ferry terminal and roro terminal contain eleven berths. Berth 64 is equipped for the clearance of railway carriages. The number of railway wagons ferried to and from Trelleborg continued to show a gratifying increase from 19,205 to 27,100 units (+41 %) in 2021. Rostock Overseas port is a major railway port on the German Baltic Sea coast and continues to grow in importance as a traditional railway port.

Around 20 % of all hinterland traffic to and from our port is carried by rail in the modal split. An overpass leads directly from the ferry terminal to the motorway A19/A20.

The roro terminal with four berths and the terminal for combined cargo traffic in the immediate vicinity, the port offers the best handling conditions for both liner and tramp shipping.

The result in wheeled cargo, i.e. ferry and ro-ro goods, achieved an all-time high with a handling result of 18 million tonnes (+2.7 million tonnes or +18 percent).

Thus the share of wheeled cargo in the total handling at Rostock Overseas port was 63 percent last year.

In order to be able to handle ships with a length up to 220 or 250 meters, respectively, in the ferry and roro division, berths 62 and 63 were modified.

By renewing the transverse quay and the construction of two 37 meter wide ramps at port basin A in the area of berth 50 it is possible for roro vessels with a length up to 250 meters to berth, load and unload here. 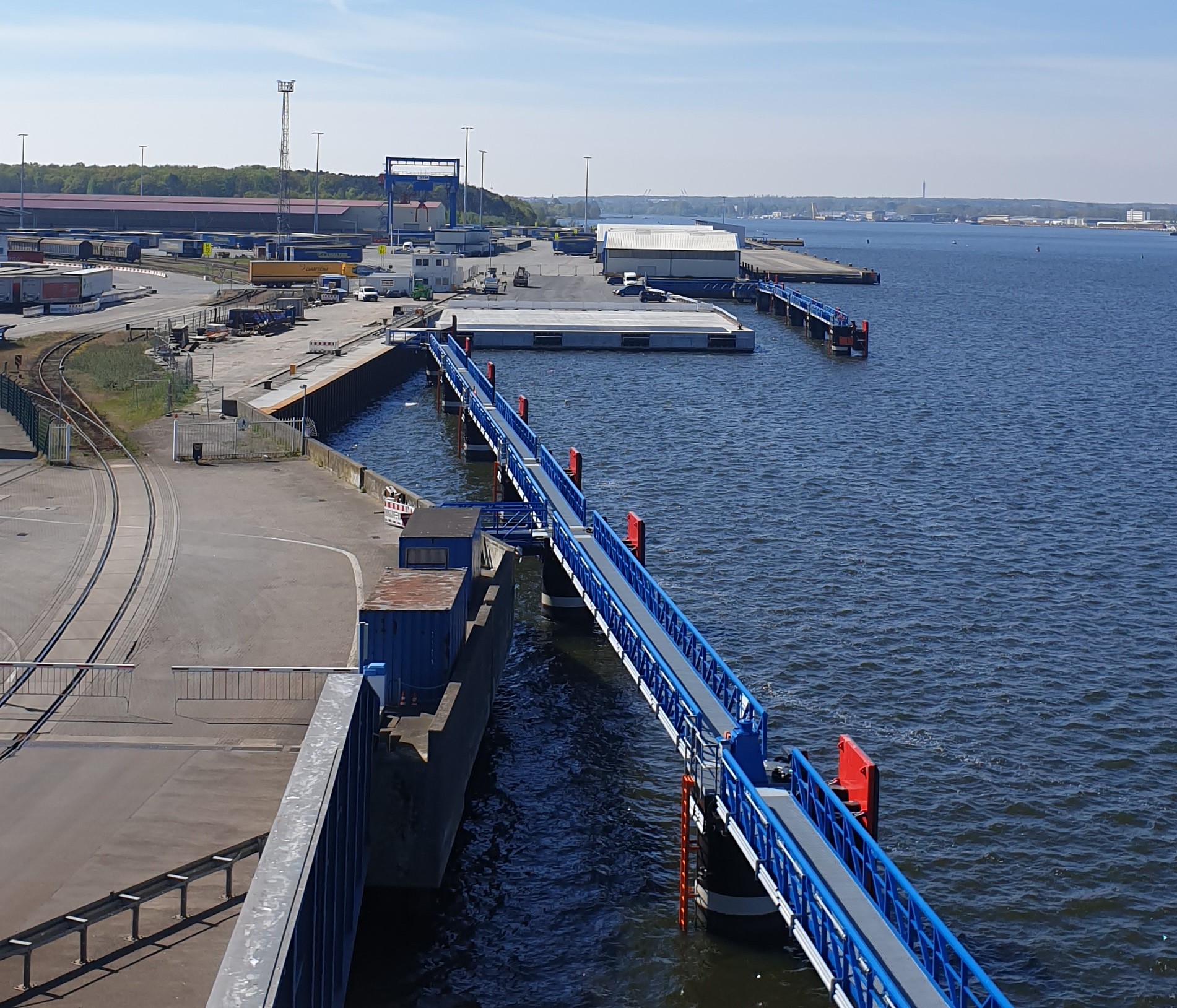 The result in wheeled cargo, i.e. ferry and ro-ro goods, achieved an all-time high with a handling result of 18 million tonnes (+2.7 million tonnes or +18 percent).

Thus the share of wheeled cargo in the total handling at Rostock Overseas port was 63 percent last year.

The steady development of the ferry and railway network over the last few years, for instance by strengthening the existing ferry… 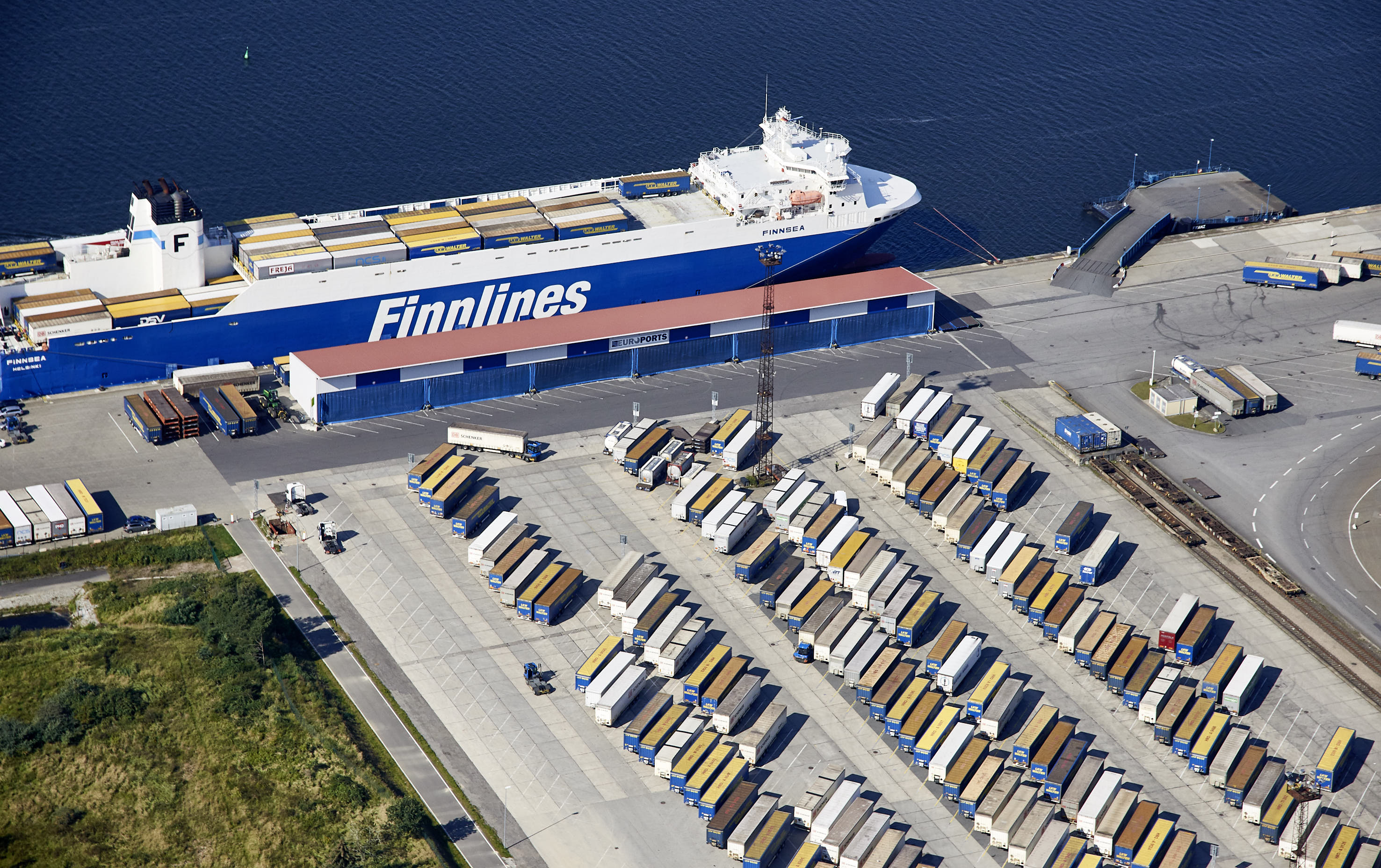 The number of truck units carried on the ferry and ro-ro connections to and from Northern Europe increased from 367,000 in 2020 to 407,000 last year, a growth of eleven percent. 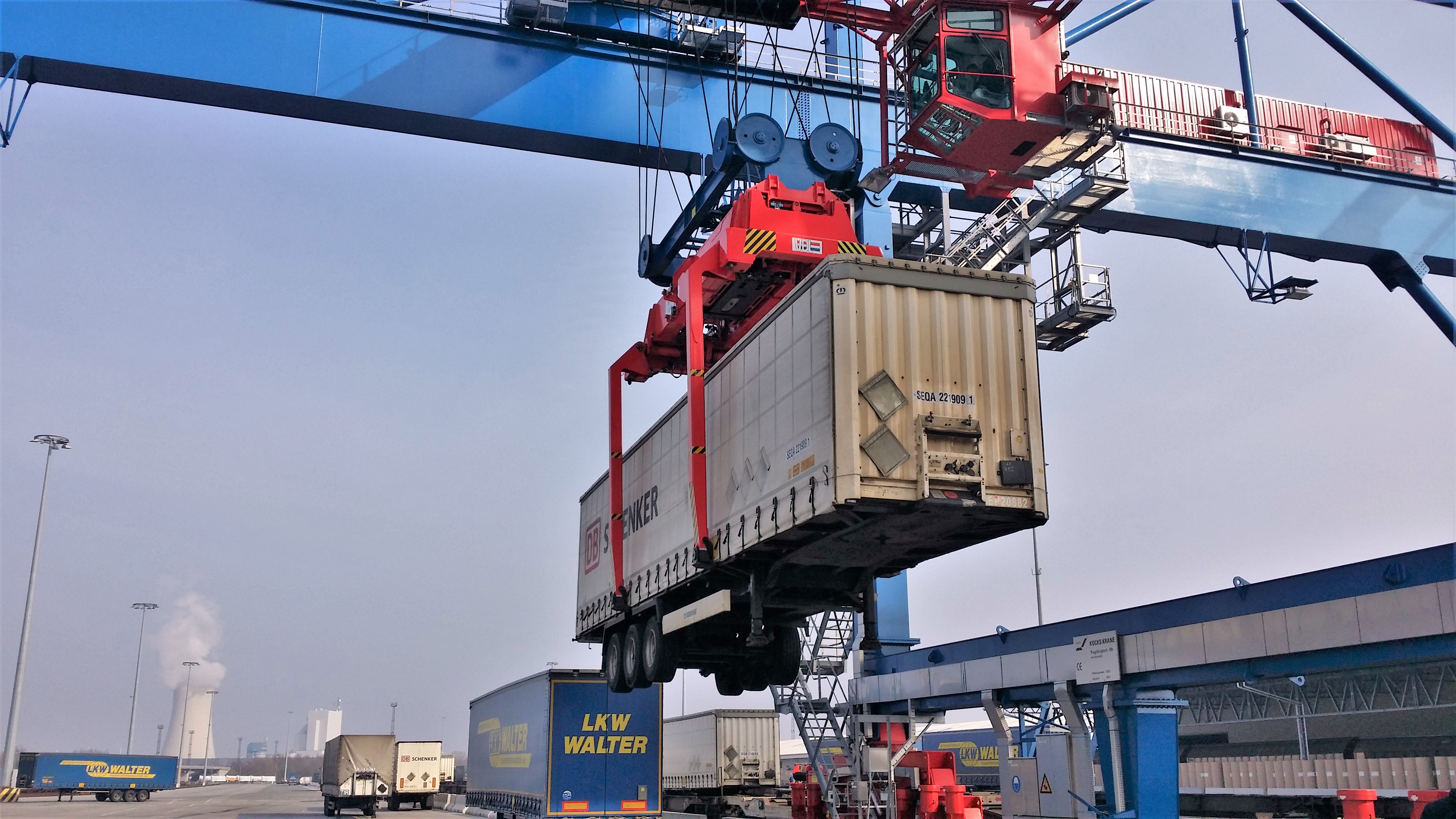 Private travel also recovered partly after the sharp decline in 2020. The number of cars and mobile homes carried was 429,000, an increase by 31 percent.

At 1.7 million passengers on the ferry lines there was an increase by 330,000 compared to the first Corona year 2020. 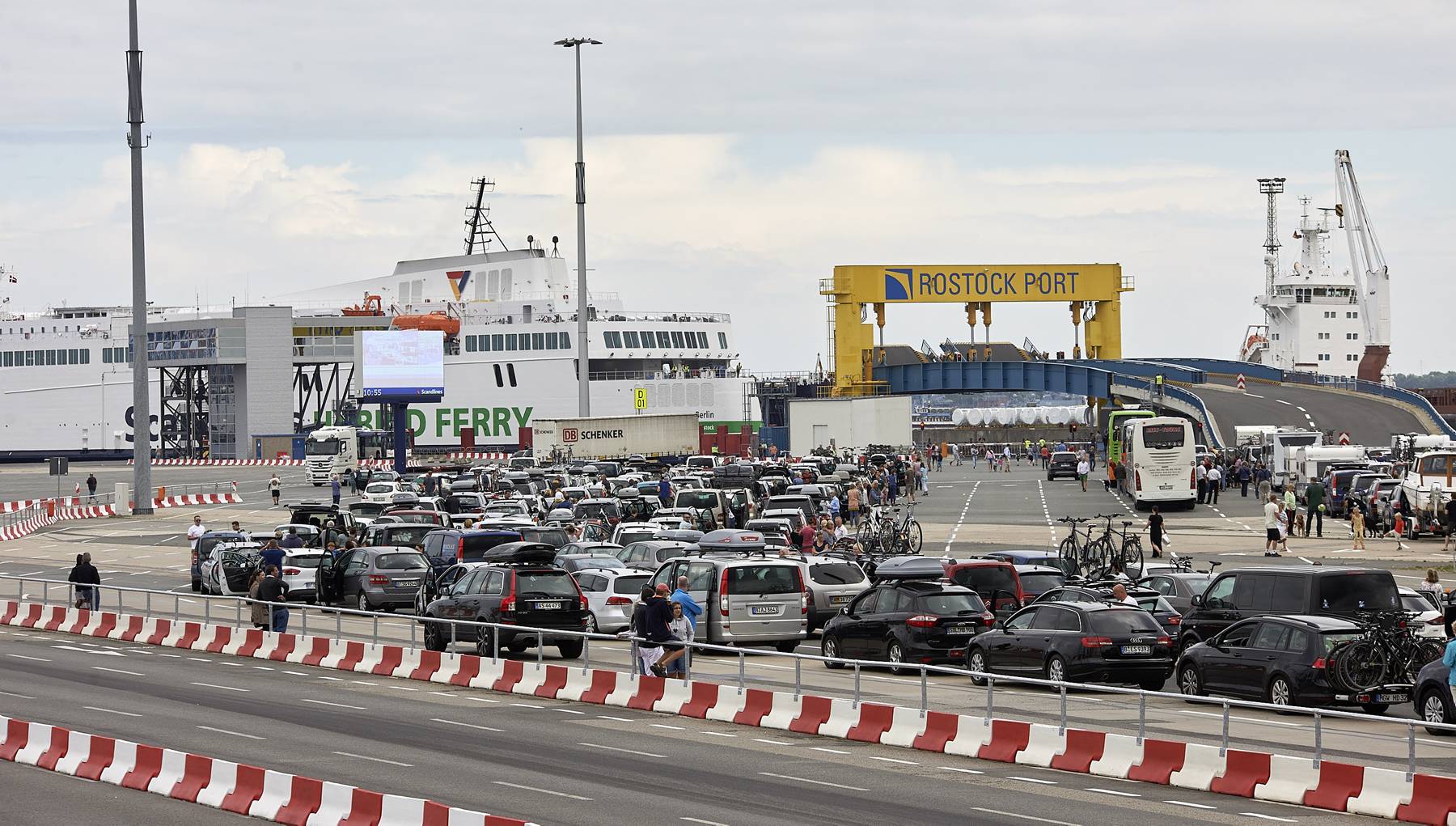 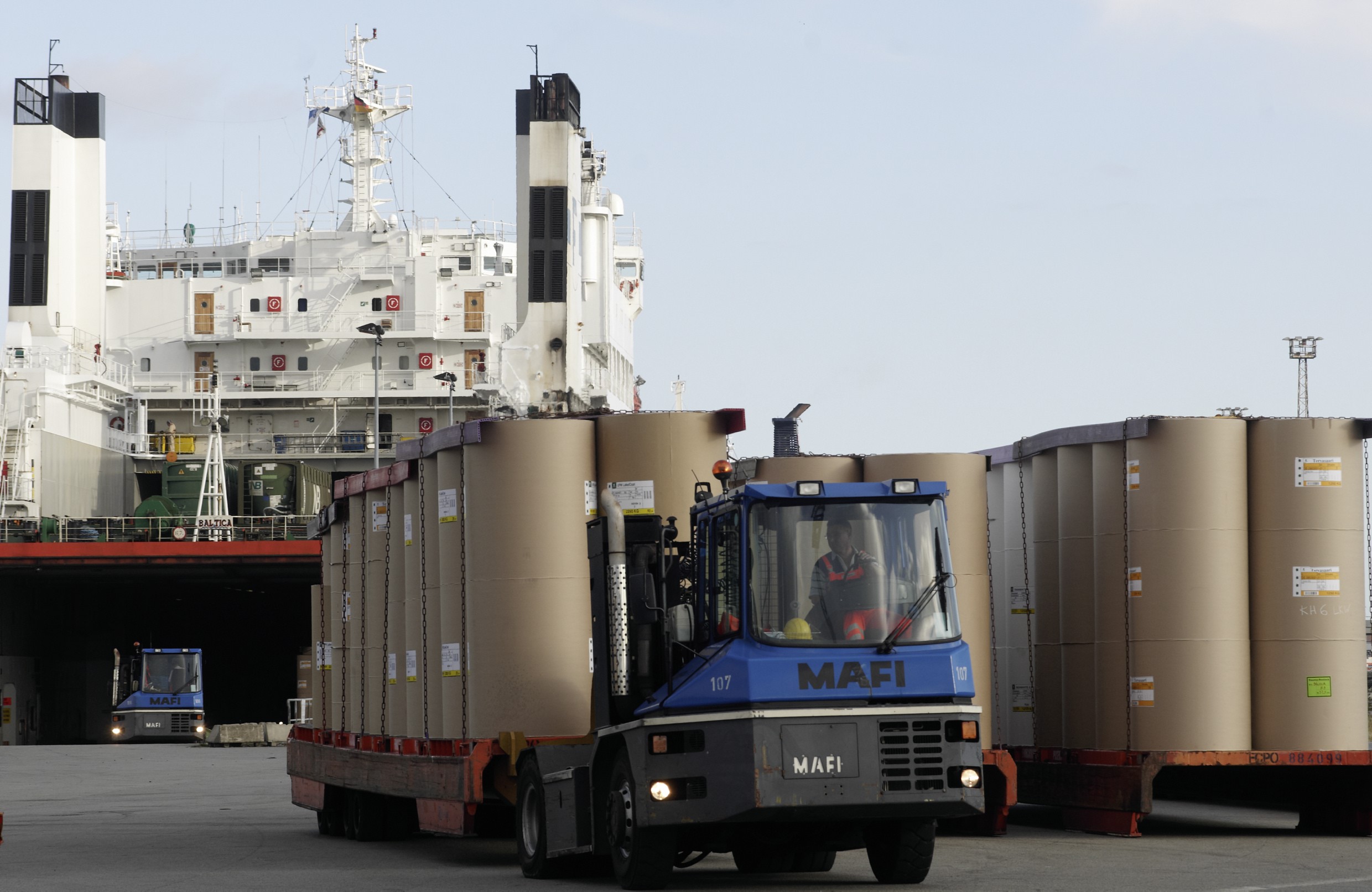 The number of railway wagons carried to and from Trelleborg increased by an enormous 41 percent, from 19,200 to 27,100 units.

Rostock Overseas port is a major railway port on the German Baltic Sea coast. Around 20 percent of all hinterland traffic to and from our port is carried by rail in the modal split. 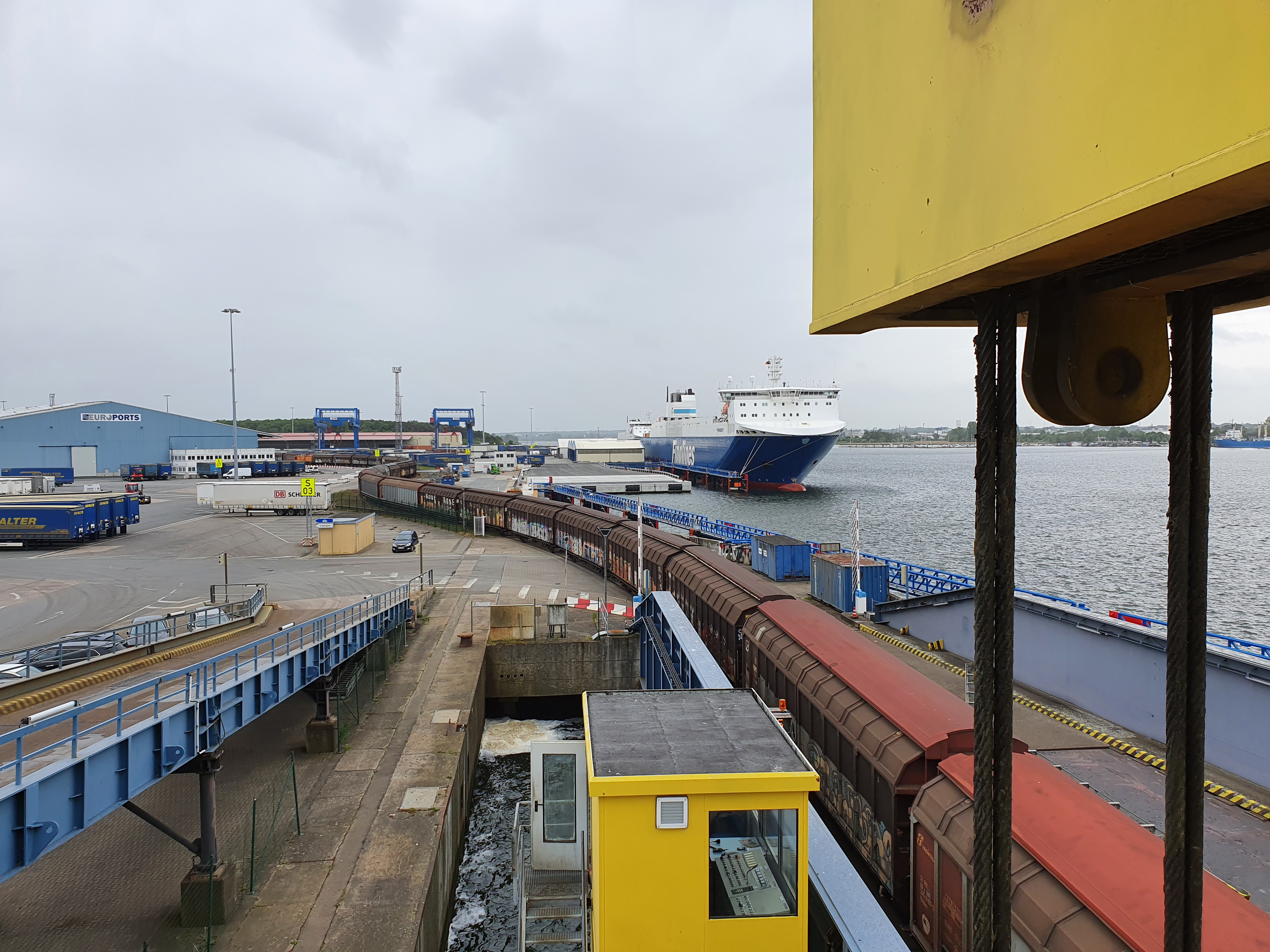 Five tracks will be served by two gantry cranes able to drive curves. So the port of Rostock is prepared for further increases in the amounts of wheeled cargo.

An additional option for servicing trains up to 740 metres in length was created last year by rearranging spaces in the track area.

Currently there are 42 intermodal trains operating weekly to and from Verona (15) and Bologna (3) in Italy, to and from Bratislava (5) in Slovakia, to and from Dresden (10), Herne (5) and Halle (1) in Germany and to and from Bettembourg (3) in Luxembourg.

Another gratifying point is the trend on the Silk Road corridor which has seen continuous growth in its first year and offers further potential for rail freight transport. Thus the Silk Road services have also contributed to the increases in intermodal traffic volume. Additional cargo volume to and from China via Rostock stabilise existing and enable new intermodal transport services. Via Rostock as a hub the China traffic is currently connected, for instance, to the Ruhr area, the Netherlands, northern Europe, Italy and the Czech Republic.

The handling of cargo units in intermodal transport at the terminal of the operator Rostock Trimodal GmbH increased significantly to over 121,000 units (+33 percent) in 2021 considerably exceeding the sound barrier of 100,000 units. 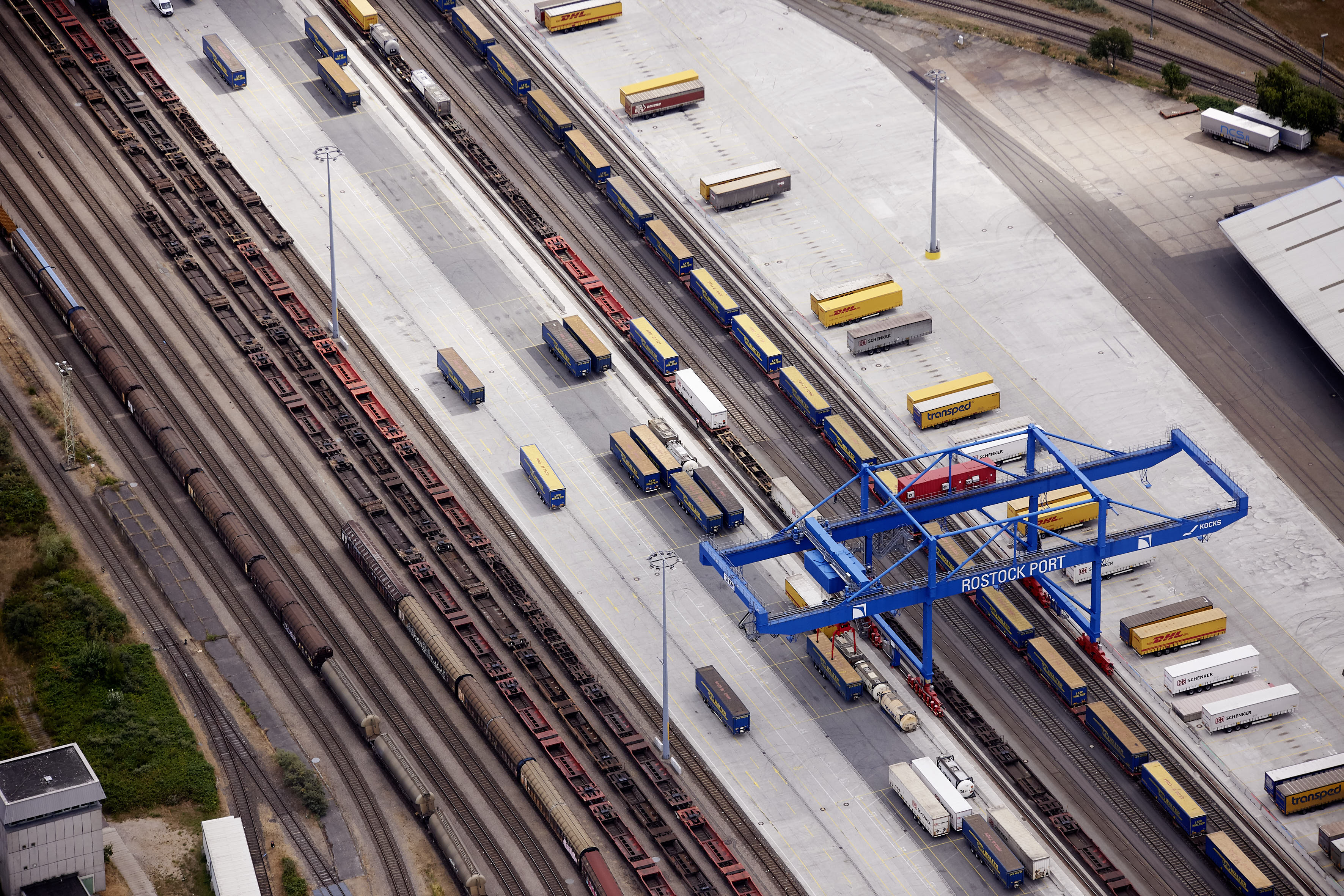 Up to 20,000 tons of coal can be discharged daily at berths 23 and 24. The rebuilding of berth 23, which is 270 metres long, was largely completed by the end of 2019. During the first six months of 2020, further work was done on paving of surfaces and railway track construction as well as dredging to a water depth of 14.50 metres. In the course of the building work the load-bearing capacity of the quay surface is increased from two to five tonnes per square meter. In the meantime the new building and dredging at neighbouring berth 24 has been put out to EU-wide tender. Bridge cranes are used for unloading sea gravel, limestone and crushed stone at berth 22. In the middle of pier III a storage area with a capacity of 300,000 tons of anthracite coal exists. Conveyor belts carry the coal to the adjacent 500 MW hard coal-fired power station. A processing facility for sea gravel and storage facilities for building materials, agricultural products, fertilizer and other bulk goods are located at berth 21, which is equipped with a harbour mobile crane with a lifting capacity of up to 84 tons.

In addition to the handling of coal, building materials, fertiliser and grain are among the most important bulk cargo handled in the Port of Rostock. 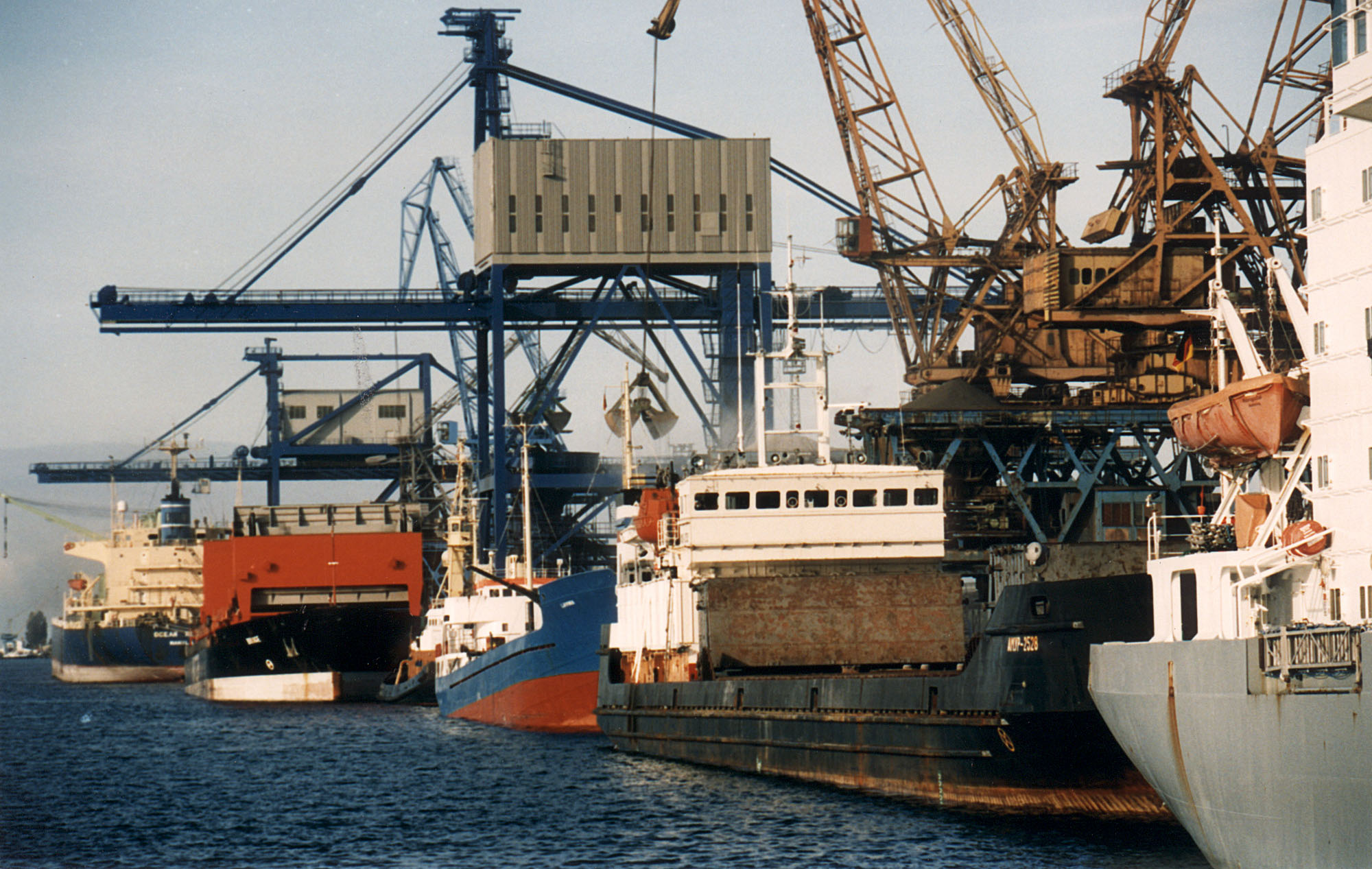 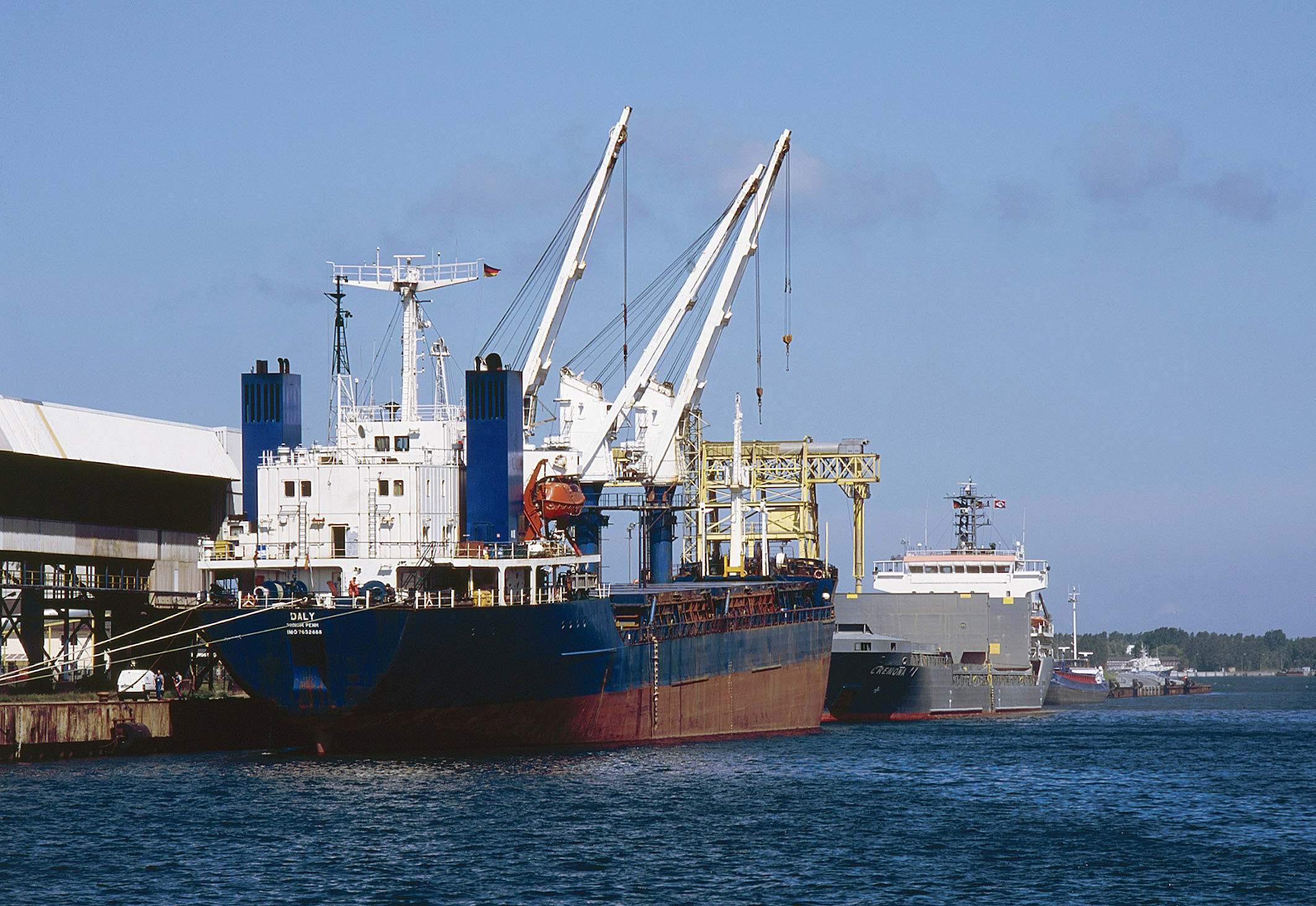 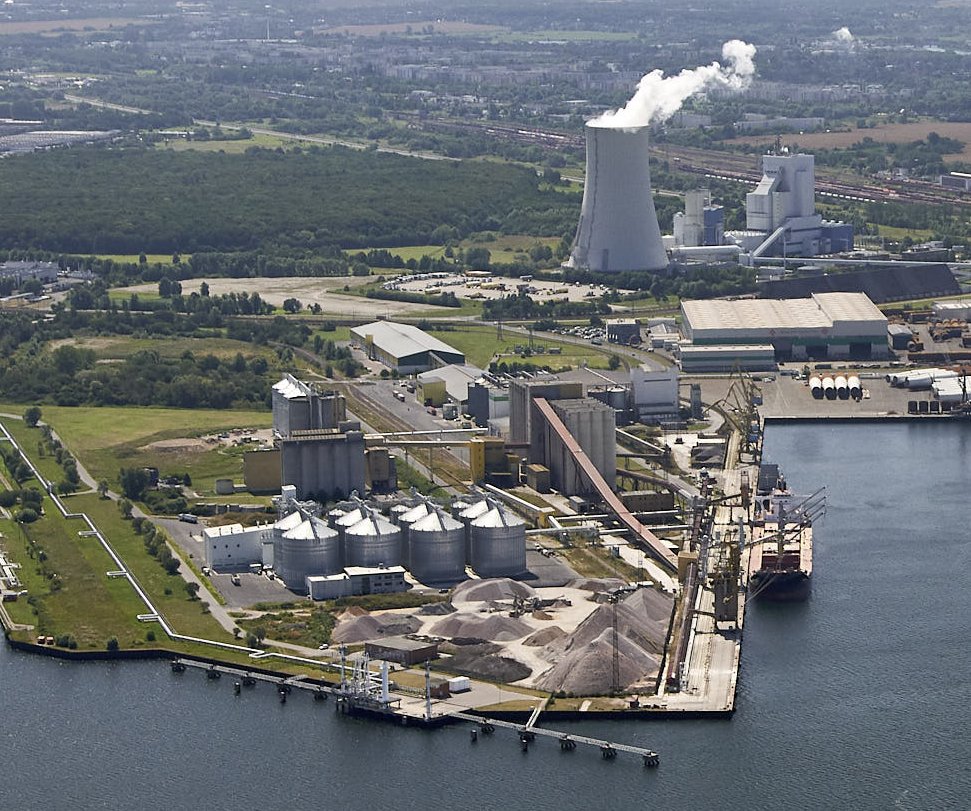 Dry bulk handling was two percent above the already very high level of the previous year with a total of 6.9 million tonnes handled. Grain is the dominant dry bulk cargo at the Overseas Port with an annual result of 3.4 million tonnes. 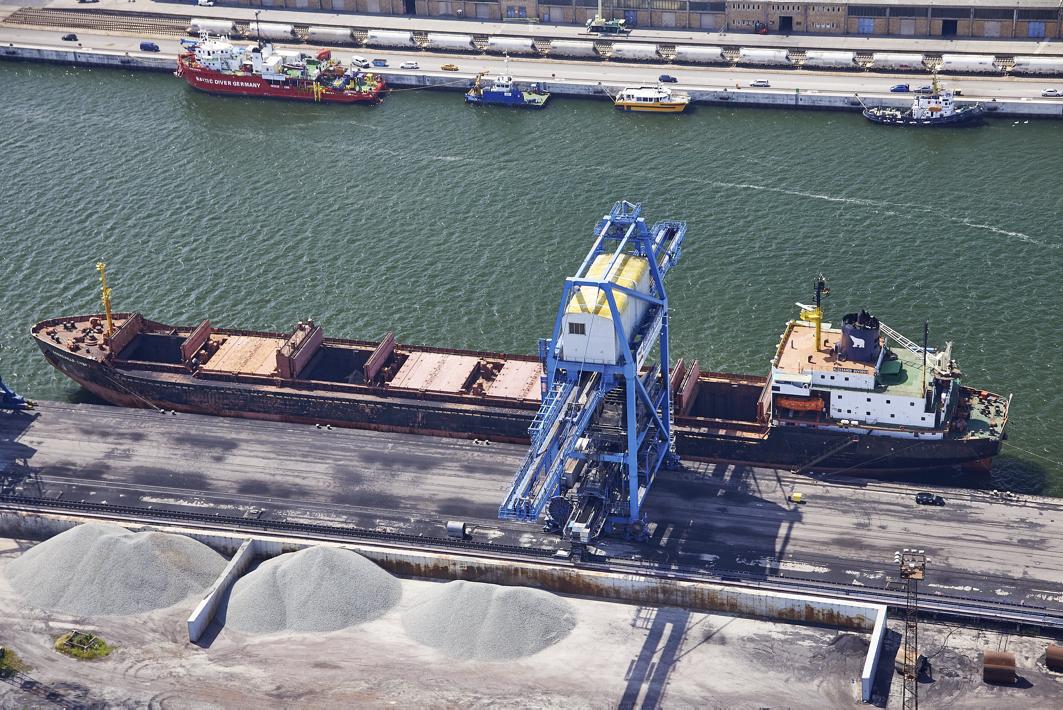 Pier II is the heart of general cargo handling. Here are mainly metals, forest products and project cargo as well as container handled. But Pier II is mainly characterized by the transshipment of wind turbines.

Cranes with a lifting capacity of up to 100 tonnnes ensure the fast handling of goods. Since mid-2019, it is possible to load goods of up to almost 300 tonnes by using two new mobile harbour cranes in tandem. Furthermore, there are two cranes available for loading and unloading at berth 16, which can be equipped with hooks or grapples. Here, among other things, sheet metal and pipes for EEW Special Pipe Construction GmbH are handled.

With berths 10, 15 and 25, the port offers three berths for the handling of particularly large and heavy goods. At ​​berth 15, the heavy-duty areas are upgraded by ROSTOCK PORT GmbH. This is where a special quay with a heavy-duty rail track was built for a Liebherr crane with a lifting capacity of up to 1,600 tonnes, which put into Operation mid of 2019. This will improve the possibilities for handling extremely heavy project cargo as well as the attractiveness of the location for further company relocations for the production and assembly of heavy cargo.

We have been able to record a very positive trend in container handling. This growth is in particular driven by the containers carried on the Silk Road between China and Europe by rail and by ship between Kaliningrad and Rostock. This prevents long waiting times at the border between Belarus and Poland and thus assures a high reliability and short transportation times for the goods, most of which are capital-intensive.

While this traffic started with one train per week from Xi’an in April 2020 it has been running in both directions since the middle of last year. With every container vessel arriving in port, up to five trains are currently loaded at the General Cargo Terminal. In this traffic Rostock Overseas port acts not just as a place of transhipment, but also as a collecting and distribution centre. All in all 23 countries are being served at the European end so far, with Italy and northern Europe representing the main source and destination points of these established regular services.

Via Rostock as a hub the China traffic is currently connected, for instance, to the Ruhr area, the Netherlands, northern Europe, Italy and the Czech Republic.

Handling of high-value-added general cargo was twelve percent above the level of the previous year at 680,000 tonnes. While the loading of containers, zinc and cellulose increased, the amount of project cargo handled went down slightly. 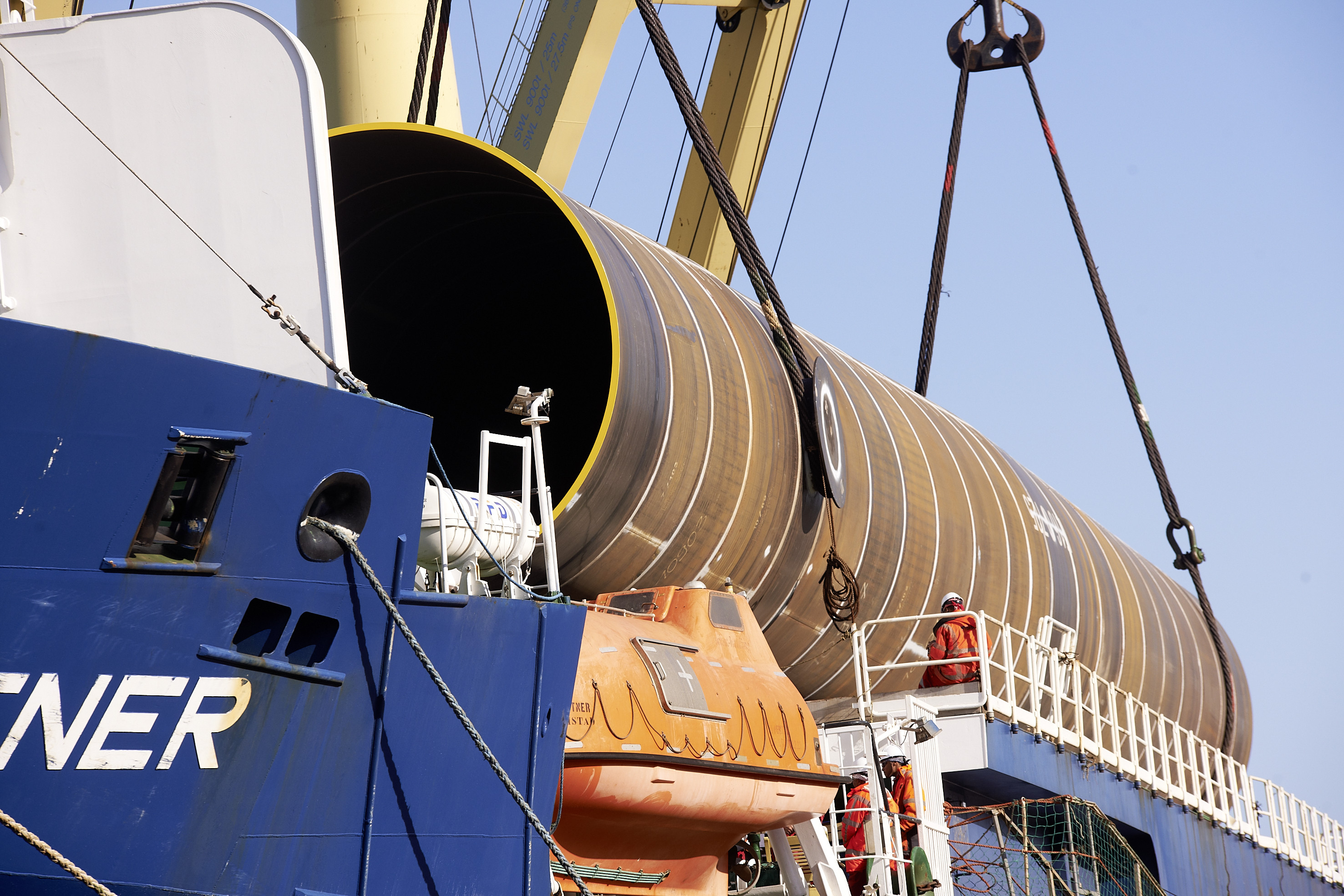 The oil harbour possesses a tank store with a capacity of 700,000 cubic meters available for the storage and throughput of mineral oils such as heating oil, diesel and motor fuel. Crude oil, liquid fertiliser and other liquids are handled here as well.

The berths at the oil harbour can accommodate 6 tankers with up to 100,000 tonnes and has a handling capacity of up to 6,000 tonnes per hour. The handling of liquids occurs by means of tank car, pipelines (Schwedt, Böhlen) and by tank truck.

Großtanklager Ölhafen Rostock GmbH, a subsidiary of Eurports Germany GmbH, is the operator of the oil harbour and provides services for all mineral oil companies using the Port of Rostock.

The oil harbour is also the location of a biodiesel plant with an annual capacity of 200,000 tonnes of biodiesel and approx. 25,000 tonnes of raw glycerine in feeding stuff quality.

At 3.1 million tonnes the handling of liquid goods was as much as 27 percent above the result of the previous year. More biodiesel, gas oil, petroleum (naphtha) and crude oil was handled, to name just a few. 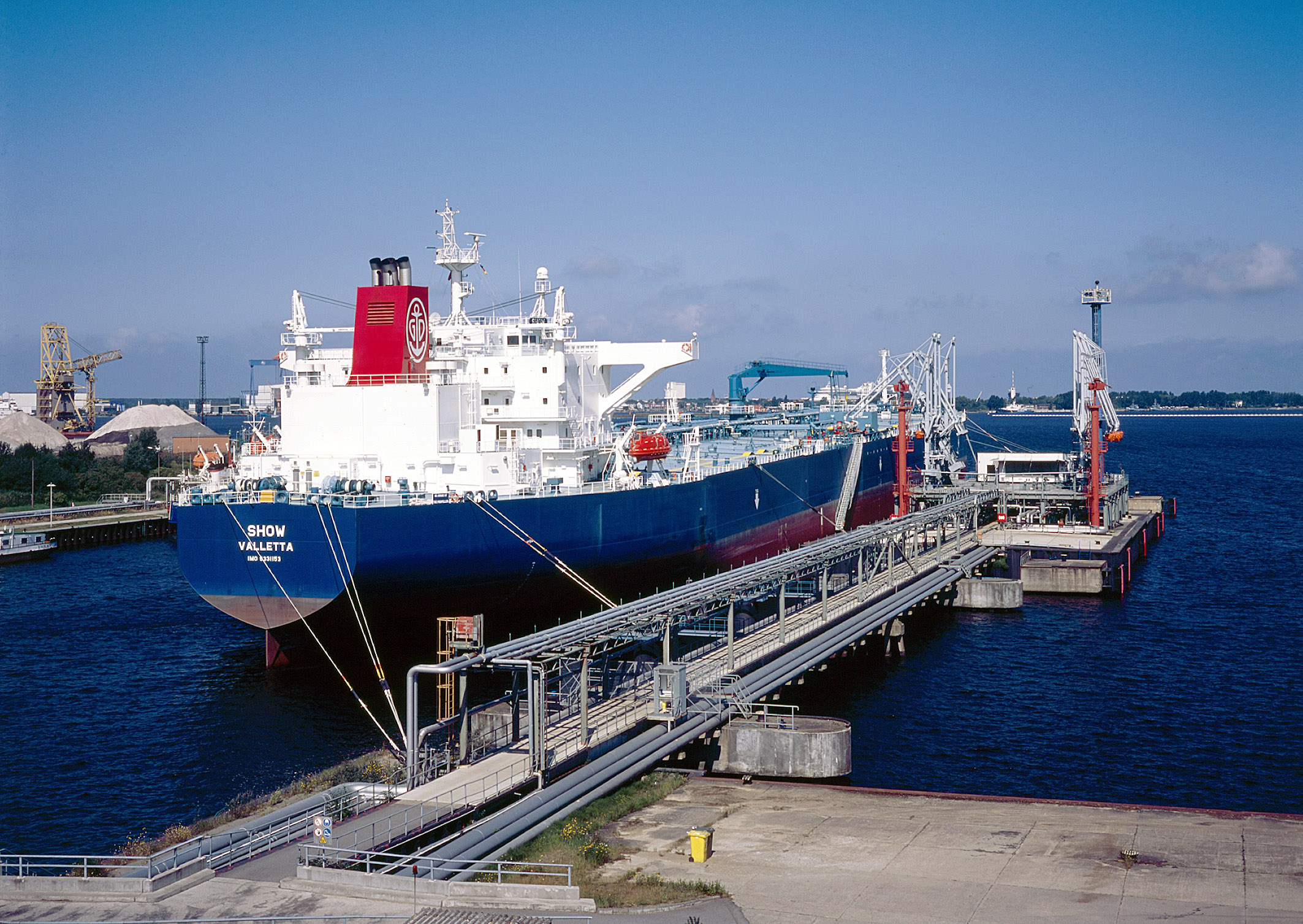